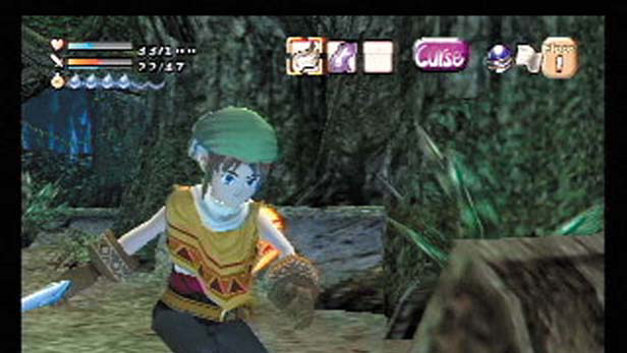 Reviewing one of my all time favorite games today, Dark Cloud. I will also be reviewing the very similar, but slightly better, Dark Cloud 2 later today as well.

This game is extremely similar to Legend of Zelda. Our main hero even has a green floppy hat just like Link lol. But it brings with it some unique new features such as rouge-like random proceduraly generated level design, multiple playable characters, and most notably, a world-creation and city building system.

Also, if you missed out on this awesome game back in 2001, you can play it again now if you have a PS4 via the playstation store.

This was Level 5’s first game – and definitely a classic must-own for any JRPG collector. Interestingly enough, when the game came to North America, it was enhanced with new content and features that don’t exist in the Japanese version such as better AI control, an entire new dungeon, and dozens of new weapons.

Where to Buy: In addition to the digital versions on the Playstation Store, you can still find hard copies of the game on sites like Amazon. At time of this writing there’s about 10 copies on Amazon with prices ranging from $12 to $99 depending on the condition and quality of the disc, book, case, etc. Check out this page for more info: http://www.amazon.com/Dark-Cloud…

Concept: 10/10 As mentioned, this action RPG feels very Zelda-ish in design but brings with it a few surprises, namely the city and world building aspects along with procedurely generated dungeons. The dungeon crawling and city building style of gameplay reminds me a lot of Azure Dream which I reviewed here.

Gameplay: 10/10 This game combines real time combat such as that found in Zelda or Secret of Mana with Occasional Quick Time Events and of course, lots of world building and city building gameplay. The dungeons are proceduraly generated and it also features multiple playable characters each with their own abilities and fighting style. However, Atla (the items needed for city building) can only be found when playing as the main character.

In city building mode, you place the Atla retrieved from the dungeons onto your town. The atla may be something like a shop, house, or even something as simple as a tree or pond, or even a new NPC. As you continue to add Atla, and continue to talk to the NPC’s you will learn more about what they want you to build in their cities. Once you reach a certain level within that city, you can move on to create additional cities as well.

The game is also unique in how characters level up. In fact, your characters never level up at all. Only their equipment levels up as you battle your way through the dungeons. However, the weapons also break if not repaired between uses. Once a weapon breaks it is lost forever. Weapons can also be upgraded by attaching different effects to the weapon which can give it bonuses such as agility, strength, or elemental properties. Although it can be aggravating at times (to lose a really powerful weapon), I really enjoyed this weapon system and felt that it really added something to the gameplay to differentiate it from all the other Action RPGs of the 90s/early 2k.

The dungeon crawling aspects can get dull at times – but I feel it’s spiced up enough with plenty of other gameplay elements to keep it from getting overly repetitive. There’s just so many other fun things to do in this game.

Story: 5/10 Unfortunately, story is what misses the mark for me in this game. I just felt it was a little too slowly paced and that both the story and the characters felt bland and not very engaging. The story tells of a time when 2 continents existed peacefully governed by two moons. One day a Dark Cloud appeared over one of the lands (hence the title of the game). Anything touched by this cloud was destroyed (Sounds very Never Ending Story-ish with the Nothing destroying entire cities, erasing people, creatures, forests, etc – Unfortunately, Never Ending Story was actually exciting and interesting, while the same can’t really be said of Dark Cloud). To protect the people and places of the land, a benevolent fairy king sealed each of them away in a magic orb known as Atla. The Main character appears when his village is destroyed by the Dark Cloud. He encounters the fairy king who tells him how he can rebuild the world but that he must first find the orbs which have been scattered throughout the continent. While the bare bones for an interesting story are in place, it just doesn’t really captivate or connect with the audience.

Characters: 7/10  The physical design and appearance of the characters is quite cute and unique (aside from the main character who looks way too much like Link lol). But their personalities and interactions often feel like an empty shell. The characters include a cat who is stuck inside one of the dungeons that the Main Character encounters. She is rescued by the main character and taken by to the city where she is transformed into a human-like girl with cat ears and tail. Another interesting character is a robotics engineer who wears almost like a hazmat suit that’s very form fitting. He’s unique because he has large rabbit like ears and appears to have a custom suit built to take into account his large pointy ears. – So the concepts and creativity for the character design definitely gets high marks, but the dialog and interaction between them, not so much.

Graphics: 6/10 I take issue with how grainy the textures are in this game. However, I like the overall character design and game world. Dark Cloud 2 features a much cleaner (and cuter) art style.

Music: 7/10 I feel that the music just isn’t anything special overall. It’s not very memorable. Dark Cloud 2 has great music, Dark Cloud 1, on the other hand, is average to good, but falls just short of greatness. It’s also only half the size of the soundtrack in terms of number of tracks as compared to Dark Cloud 2.

Replay Value: 6/10 Although it’s a linear story, the world and city building aspects make it interesting enough to come back to.