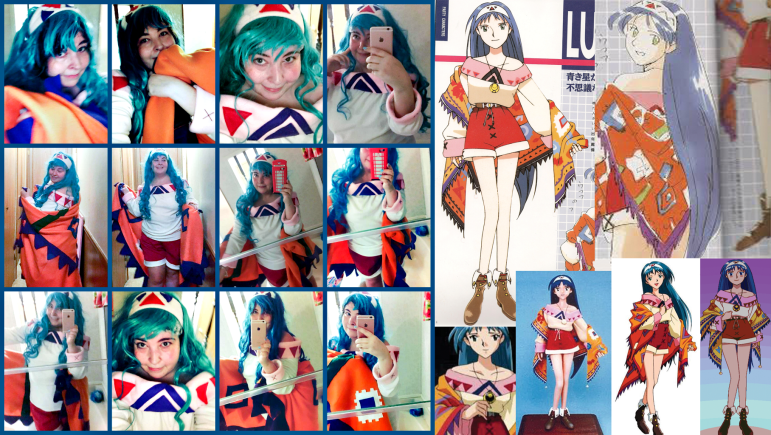 Lunar is one of my all-time favorite videogame series still to this day. I love pretty much anything by Working Designs really. Originally I was invited by a friend to go to a convention and cosplay together, but they couldn’t make the convention, so I actually haven’t gotten to wear this yet, aside from trying it on for photos. Hoping to wear it to Tekko in March 2017. This costume was commissioned and designed by Kathy’s Creations in Greenville, PA. My Boots still have not arrived, will add more/new pics when boots arrive, or when at a convention. Thanks for looking and have a great day <3.

This is just a very quick photoshoot, I didn’t take time to pin back my own hair before applying the wig, and am wearing absolutely no makeup. Wig also probably could have used a bit of spray and detangling – also later realized I should have tucked in the shirt to look more like the character, but well these are things that I will remember to do next time 🙂 Hopefully when it counts, like at a convention.

Lunar Eternal Blue is the 2nd game in the Lunar series. Both Lunar Eternal Blue, and Lunar Silver Star have been remade numerous times. Their first appearance was on Sega CD back in the 90s. That is when I fell in love with the franchise. After that, they were remade for Sega Saturn (but not brought to the USA), and later ported to PSOne. Since PSOne, Eternal Blue has NOT been remade, while Silver Star has been remade numerous times for PSP, GBA, IPAD, and more. I don’t know why this is, since Lunar Eternal Blue, in my opinion has a much better storyline, characters, etc. Both games are love stories at heart, both set in a medieval fantasy type setting. The worlds in Lunar are rich with lore and very detailed.

If you’ve not played Lunar, you should play it yourself, but if you’re curious as to who this character is, there is a brief synopsis below in the Spoiler Tags:

The basic story of Lunar Eternal Blue focuses on the love story between Hiro and Lucia. Hiro is a young wannabe adventurer / treasure hunter who spends his time exploring ancient ruins. While Lucia is a mysterious girl who “awakens” in one such ruin, bearing urgent news and a message for the goddess, however, the time for her awakening is not yet near, and the goddess has long since left the mortal world. Lucia must learn to trust in humanity. She begins to evolve from a stoic quiet personality to a warm, carefree, and even vulnerable young woman. However it is a struggle for Lucia to let go and trust in humans, because she views them as weaker beings. In the end, she is unable to fully trust the humans and thus decides to return back to her own world, however, the power of their love helps to reunite them.

Update: My boots finally came so here are some more Pics. Also tried another wig I had which is more blue and less aqua colored.

Also there’s 2 fun phone apps that can be neat for cosplay. YouCam lets you put on makeup without changing your face or features very much (may change eyebrows with some makeups, and theres also a few fun animal-face filters). YouCam has hundreds of filters AND you can go “off the map” by creating your own makeup without use of the filters. Making the possibilities almost endless. The second app is BeautyCam which turns your pics into anime characters (it doesnt have many filters and there may be better/similar apps)

I also used Adobe Lightroom in some of the pics…