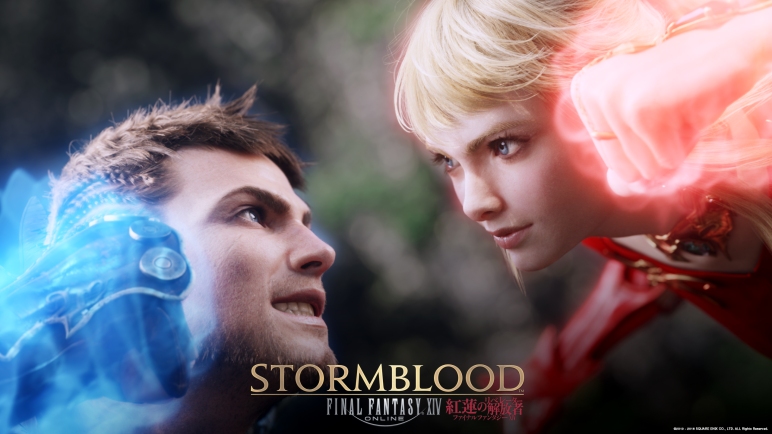 When you think of MMORPGs, it’s no surprise for the big three to come to mind: World of Warcraft, Guild Wars 2, and Final Fantasy XIV. Up until recently, I would say these three have been pretty evenly matched with the exception of Guild Wars 2 not seeing as much popularity as the other two. But with the release of Stormblood, I would say Final Fantasy XIV has taken the lead!

If you haven’t seen the official launch trailer yet, check it out here!

Stormblood is the second major expansion after Heavensward. The first installment of Final Fantasy XIV in 2010 ended up as a failure as it drastically failed to meet expectations. Since then, the next three installments and expansions, A Realm Reborn, Heavensward, and Stormblood have all been massive successes.

Final Fantasy XIV: Stormblood follows the story of the Warrior of Light played by yourself, the player character. Stormblood focuses on the conflict between Eorzea and the Garlean Empire that has oppressed the land of Ala Mhigo for 20 years. See the new sights that Stormblood has to offer with this tour of the East.


With Stormblood, we see a complete revamp to the combat system with new features and functionalities. This allows for a much more dynamic battles and gives you the ability to be more involved. Strategizing based on your fellow players’ roles and skills will also be crucial for taking down the realm’s most powerful bosses.

If you thought that was cool, just wait till you try out the new DPS jobs, Red Mage (RDM) and Samurai (SAM). I mean, just look at them! With so much versatility and heavy damage dealing respectively, RDM and SAM just feel so impactful and fun to play.

If you’re thinking that the other jobs have been left in the dust, not to worry! Every job in Final Fantasy XIV is getting a revamp with Stormblood. This means new skills and actions for a completely new feel! Below, you’ll find a video of every job’s actions, including RDM and SAM.

With new challenges in the form of dungeons, raids, and all kinds of new enemies and allies alike, you’ll be in for one heck of a ride. Stormblood increases the level cap from 60 to 70 so even if you were completely maxed out in Heavensward, there’s still so much more to do! Acquire new items, weapons, armor, mounts, and of course, we can’t forget about glamour now can we?

FATEs now have an added feature called Twist of Fate. Here, you get bonus every time you dispose of a special enemy. In this case, you get a dramatic boost to the amount of experience gained from FATEs. So let’s hope this makes leveling our jobs to the new level 70 cap much easier!

The first major expansion, Heavensward, gave players the opportunity to fly across the skies in Heavensward areas with flying mounts. And now with Stormblood, the ability to explore surface and deep swimming in new areas as well as old ones has been introduced.

If Stormblood didn’t sound awesome before, I bet it sounds pretty darn awesome now, right? Just like with flying, in order to unlock swimming you just have to go through your main scenario quests. Time to get to exploring the world beneath the surface of the realm of Eorzea. See all the underwater sights and don’t forget to take some beautiful snapshots with /gpose!

If you’re new to Final Fantasy XIV or have never played it before, now’s the time to at least give it a try. It really is the complete package: an amazing story, intricate design, fascinating lore, an expansive world, engaging combat and mechanics, and a friendly and helpful community. I thought I had seen it all with Heavensward but Stormblood takes the cake!